verb:
Texting someone again after they deliberately ignored you the first time.
In a sentence:
I want to see what Adam is doing tonight, but I can’t double-text him. Ugh.

For some reason, it appears that there are bros out there who are unaware that aggressive, repeated, one-sided conversations are not the route to a long-term relationship, hookup, etc. Here are 15 bros who haven’t figured this out yet. Thanks again to my readers who sent these in– you guys rOcK**

1.) We’ll start off with my own personal story. I met bro #1 my freshman year of college on the way back from a nightclub. We couldn’t find a taxi so we flagged down a limo that this guy was riding in. I give him my number because I was 18, unintelligent, and white-girl wasted. I guess he managed to find me on Facebook too. We met April 2012, and haven’t seen each other since.

3.) “Wish I kept the old ones because he used to tell me how pretty I was and how much he loved me, mind you that I have only spoken maybe two words to this kid in my entire life. This kid seriously hasn’t stopped messaging me for the last 3 years and I haven’t answered once. He was a senior when I was a freshman in HIGH SCHOOL. I didn’t wanna block him because it was too entertaining, having him on a 24:0 message to response ratio.. Killin it. I fear the day he shows up to my house with either a marriage proposal or a knife to kill me. Or both..? Enjoyyyyy”

7.) Ex boyfriends that just can’t understand why you can’t “chill”

10.) “I had a one night stand with him when I was like 16. He’s a man whore right. I never text back. I go in his Facebook- HE HAS A SON. A baby. He’s our age. And he still is constantly hitting me up to “blaze ” lmao… Like… Does he not realize I can see on his Facebook that he has a baby. I barely know him- we met in middle school at CCD (classic). Constantly pursued me cuz he’s a sex addict (I could tell by the way he fucked at age 16…) and now years later he still texts me relentlessly and little does he know I know he has a kid. He’s so retarded”

11.) “Some guy my friend met once. We brought him to her apartment and she was like you neeeed to leave and he started texting her 1000000 times so I took his number to mess with him. “ 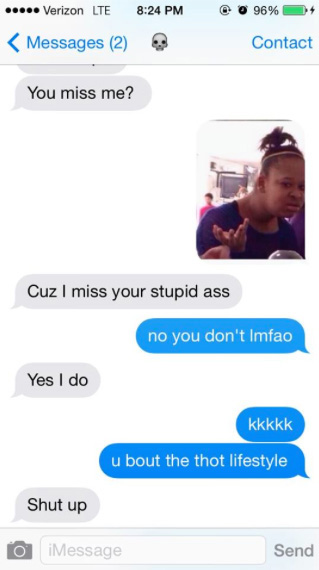