With the release of Batman VS Superman looming over us, I am sure I am not the only one who is thinking of other fight mash ups. Lets look at some of the most intense fights out there, and how they would actually play out if they ever happened.

Jimmy Fallon and Justin Timberlake are known for being the coolest Hollywood bromance out there, but who would win in a fight? They are both about the same size, so Jimmy and Justin would be a very interesting match indeed. Why do we want to see these two fight? They just look to damn happy together.
My prediction:
The fight would, no doubt, be broadcast on The Tonight Show and would draw in more viewers than the network has ever seen before. Justin would sing the National Anthem to get things kicked off and then the two brawlers would step into the ring to face each other. DING! The bell sounds and the two prepare to fight, Fallon pulls back a fist and throws a direct punch at Timberlake’s face….But oh no! He is intercepted by a hoard of fan girls, carried out of the building, and thrown into traffic. 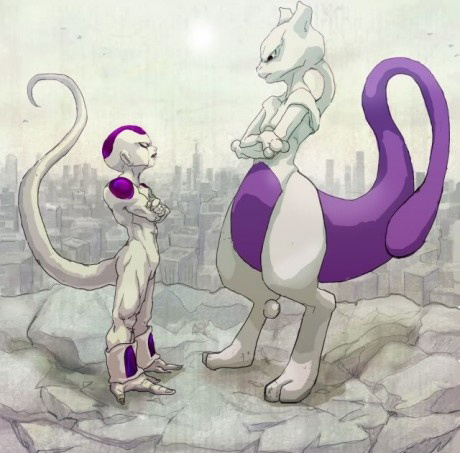 Why do we want to see these two fight? Mostly because they are both pink and white, but they are also both incredibly powerful, so this would definitely make for an interesting fight.
My prediction:
The two would begin with a drawn out dialogue about who is the most powerful. After this dialogue is over, they will then begin talking a bout who is the biggest genius. This will continue for another thirty minutes, before the two begin discussing who is the most deserving of a victory. At this point Mewtwo and Frieza will begin to see eye to eye, and join forces to catch all Pokemon, clone them, and use them to defeat Goku.

Rousey has already said once before that if she could fight any one person, it would be Kim Kardashian. Why do we want to see this fight?…Chick fights are awesome, thats why.
My Prediction:
Ronda Rousey is known for beating the living shit out of people, Kim Kardashian is known for having pictures taken of her. If I had to guess how this fight would play out, Rousey would essentially hold Kardashian down and beat her face into a pulp. As this is happening, Kim will continuously snap and load photos of the incident to Twitter. Her marketing team would then sprinkle some sponsored content in the tweets, and Kardashian would make roughly $3,000,000 for her tweets. In short, Ronda Rousey would win the battle, and Kim Kardashian would win the war.

7. Brotherhood of Steel Paladins VS Spartans

This may be one of the larger battles listed here today. The Brotherhood of Steel from Fallout VS the Spartans from Halo…armed with any and all weapons available in game. Why do we want to see them fight? They are two of the strongest armies in video gaming and they both look slightly robotic.
My Prediction:
The fight will begin normal enough. Bullets and lasers flying in every which way, seemingly random casualties, explosions in every direction, and overall two evenly matched forces. But as the fight continues I foresee the Paladins, one by one, remembering that they can use V.A.T.S. With this, the battle is already over, as headshots begin to flood the battlefield, the Brotherhood of Steel seizes victory.

Why do we want to see these two fight? Because they are huge!
My Prediction:
The two gentle giants would walk up to one another and engage in the most ferocious stare down you have ever seen. As athletes, the two understand the importance of stretching first, so they loosen up a bit before beginning the brawl. As they finish stretching and prepare to fight, Shaq is approached by a man in a suit. The man offers Shaq a little over $1million to drop the fight and endorse his new athletes foot cream instead. Shaq graciously agrees, forfeits the match, and Ming stands victorious!